Of all the decisions faced by young people, none is as serious as when, and whom, to marry. Although we like to imagine love conquers all, in reality, financial considerations can play an outsized role in these decisions. Combining finances creates more buying power, making the purchase of a home and other life goals possible, but also creates shared responsibility for the debt. That includes the more than $1.5 trillion in U.S. education debt held by over 44 million Americans.

A recent survey commissioned by LendKey found a substantial number of young people concerned about marrying into debt. Sadly, more than half said the debt load of a prospective spouse would be a factor in tying the knot. Further, while most respondents (69%) said they would not postpone getting married before paying off a student loan, nearly one-third of respondents between 18-34 said they would — or had — made such a decision, compared with 17% of those 35-54. Clearly the student loan debt load is having an impact on the forming of new households. As we approach Valentine’s Day and its surge of marriage proposals, it’s likely that some may hesitate to ask for or accept a partner’s hand in matrimony because of their student debt burden. 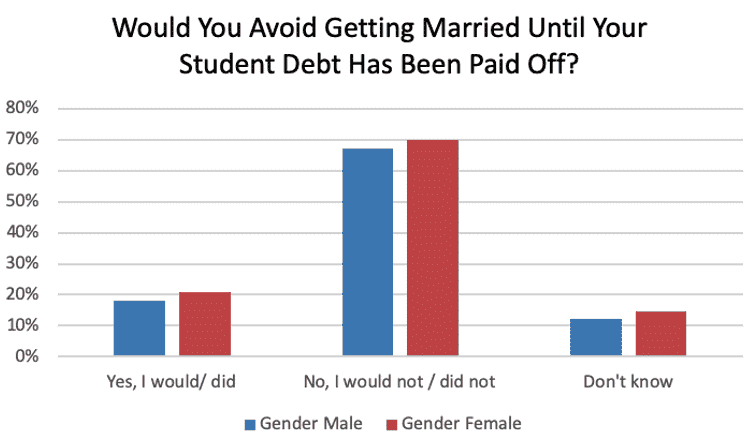 But just as education is the best way to ensure a bright career future, it’s also the best way out of the student debt quagmire.

LendKey’s survey found that borrowers need more financial literacy around the student loan process, with only 8% of respondents having shopped for the best student loan. By contrast, 66% comparison shopped for cars, 60% for insurance and 54% for clothes. Almost two-thirds correctly answered that large banks offer student loans, but 40% said they believed loans come from schools themselves, and 14% incorrectly guessed angel investors are providing loans to the public.

Happily, about half of respondents are aware credit unions offer student loans, which shows marketing for these products is working. Community banks and credit unions should recommit to and expand their work to get the message out that lower rates and better terms — with institutions that know borrowers by name and care about their future — are the best course out of debt.

Here’s hoping that in this season of love, millions will join hands, say “I do” to better financial planning, and face this challenge together.